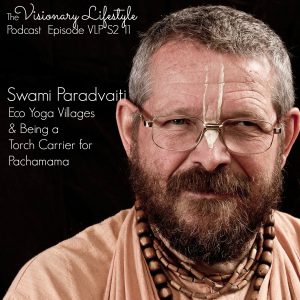 Our guest today is a traveling monk known as Swami Paramadvaiti. He belongs to a monastic order from India, called the Vaisnava tradition, more commonly known as the Hare Krishna Movement. He began monastic life when he was initiated at the age of 18 by renowned spiritual master of the Gaudiya Vaishnava tradition, Srila A.C. Bhaktivedanta Swami Prabhupada (the founder preceptor of the International Society for Krishna Consciousness, commonly known as the “Hare Krishna Movement”.)
Seven years later he accepted the vows of a traveling monk . He now travels the world staying in one place usually not longer than 3 days.
For more than forty years he has devoted himself to cover the world over, speaking about Vedic culture and its practical solutions to modern problems. In 1984 he established his own spiritual mission called VRINDA, the Vrindavan Institute for Vaishnava Culture and Studies, with the aim of spreading the cultural heritage of the Vedas around the world. In the same way, he has established more than thirty-five Eco Yoga Villages in South America and Europe, creating true Vedic spiritual oasis where people from different countries can have a profound approach to this sacred philosophy.
He calls himself a torch carrier for Pachamama, which is the word for earth in South America.

In this interview we speak of many things including a solution to the environmental crisis,
The United Nations of Spirit: which is Weaving a Tapestry of Consciousness and Love, and he gives us his perspective on the fact that despite cows being regarded as Divine in India, India remains the world’s largest exporter of beef.

We recorded this interview at the International Yoga Festival , sitting right next to the food tent, and unfortunately we incurred some noise from the clean up after lunch, but the Swami made a great joke just before I welcomed him to the show, that was right on point and brilliantly reframed my frustration with the noise, so I left it in for your enjoyment.

This man has a huge heart that you can see and hear from a mile away. He offers lots of wisdom for living a life of peace and harmony with the earth and all the sentient beings we share it with.
I hope you glean some nuggets of inspiration from listening to this wise soul, and I hope you’ll too be inspired to become a torch carrier for Pachamama.