You are here: Home / Podcasts / VLP 05 The Buzz on the Bees with Maryam Henein 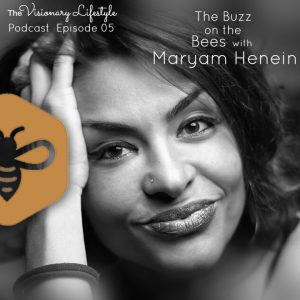 Today’s guest is Maryam Henein. Maryam is an investigative journalist, activist,  filmmaker, yogini and entrepreneur. She’s best known for directing the documentary Vanishing of the Bees narrated by Ellen Page .

Following a near-fatal pedestrian versus car crash in 2002 that dragged her for 49 feet, she researched issues of health and nutrition to help her in her recovery, and through that, became aware of colony collapse disorder, which led to her to make her film.

Since the release of Vanishing of the Bees, she has become an outspoken advocate of bees and bee colonies, non-GMO foods and the release of pesticides into the environment.

Her latest venture is honeycolony.com, a member supported online magazine and marketplace that hosts a number of optimized-health and investigative writers.

I know her as a tireless voice for health , the environment and as someone who encourages people to be their own best health advocate.

In this interview we discuss why bees are sacred, the most ethical way to source your bee products, pesticides on planes, autoimmune disorders and lots more. Let’s tune into the show to get the buzz
You can find her on twitter at https://twitter.com/MaryamHenein and at https://www.honeycolony.com